Conceive, design and manufacture a fully automatic robotic resistance-welding cell producing parts for cars. This is the 6th similar system for this customer, who also has ten of our powered end changer MIG welding systems

We were required to process 3 different parts with two different types of weld attachments, both studs and nuts. The attachments are bowl feed with an interlocked door to allow easy refilling.

The complete system must perform a 100% check on all parts, with part counters for both passed and failed parts to prevent cross contamination.

Initially the Proface touchscreen module is used to inform the cell of the part being processed. Once the required part is selected, it shows counters and other relevant information

The loader places 4 identical parts onto the loading station; each part is positively identified with a sensor to allow for end of batch amounts. The fixture allows four parts of all three types to be loaded, with the system will performing an integrity check to ensure the required parts only are present.

Once the loader is clear of the safety laser scanner, a button is pressed informing the cell that parts are ready. If the robot is ready to accept the parts, the turntable rotates, bringing out an empty loading station to be re-filled whilst the robot is working

The system checks a part is present, and collects it from the loading station with a triple pneumatically operated gripper. This part is then moved to the relevant welding process, and the three attachments are welded.

On completion of the final weld, the part is moved to a vision system which checks all three welded parts are present and within customer set tolerances

The first part of a batch is always brought to an interlocked window for weld integrity tests. If the part passes, the system automatically starts to run the batch. If the part fails, it is manually discarded into a red bin and a counter records the failure on a part fail counter. The robot will then bring the next part to the window for further testing. This loop will continue until a part passes and the batch run can continue.

If a part fails the vision check, the robot will discard that part into the red bin and record each failure on the part fail counter.

Each part has to pass the vision check, these parts are placed into one of two unload boxes on the unload turntable. Once the required amount of parts are in the boxes, the system checks it has two boxes ready on the outside and the unload pushbutton has been pressed and rotates, bringing two empty unload boxes into the cell.

At the end of the batch a manual count of the failed parts in the red bin is taken, ensuring all parts are accounted for.

The system is processing 4 parts in under 85 seconds. 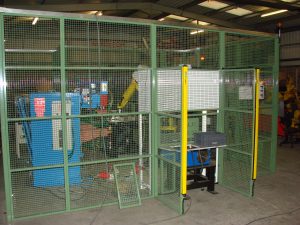 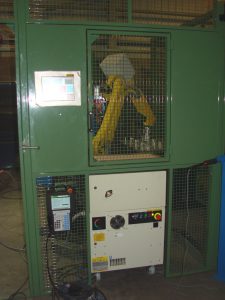